Well, Homer is still exceedingly cute, and I really haven't forgotten about the next recipe (I've just been writing madly on ECHO; I mean it when I describe this stage as the Final Frenzy; I do precious little else!).

However, I do have to pause for a bit here, because a year or so ago, I agreed to teach a two-and-a-half hour workshop on Writing Historical Fiction, as part of a week of such workshops sponsored by a local group called Arizona Authors. (At the time, of course, I had no idea the FF was going to hit _now_).

Anyway--thought I'd ask, for any of you who might harbor ambitions (or merely curiosity) in this regard, whether there are any specific questions _you'd_ like answered, if you were taking such a workshop, or any particular material you'd like to see covered?

I think we may do a minor bit of writing in the class--can't do too much, as it takes quite a bit of time, but I'm thinking a few paragraphs might be fun; any topics that you'd suggest? (E.g., introduction of a major character, setting a historical background, etc.?)
Posted by Diana Gabaldon at 1:44 PM 59 comments: 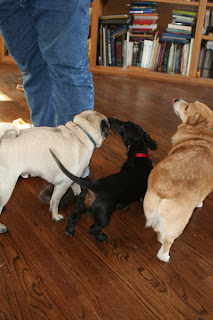 Email ThisBlogThis!Share to TwitterShare to FacebookShare to Pinterest
Labels: The gang 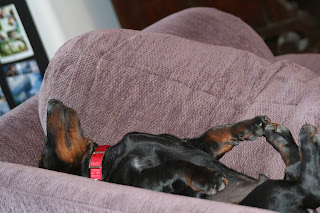 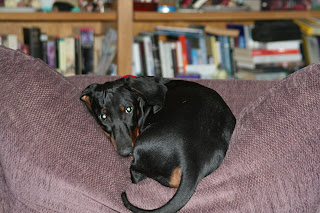 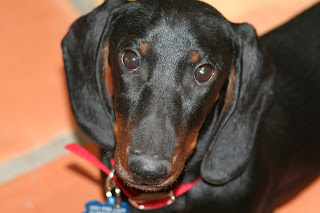 Posted by Diana Gabaldon at 9:31 AM 6 comments: 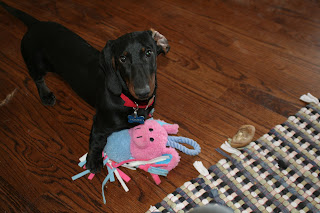 See if this worked.
Posted by Diana Gabaldon at 9:29 AM 19 comments:

Well, we are once again a dogged household. We've been without a dog--for the first time in thirty-odd years--since our aged Molly (she of the gruesome post-mortem encounter with coyotes) succumbed to congestive heart failure at the age of sixteen or so, a few months ago. I'd wanted a smooth standard dachshund like my beloved Gus, if I could find one; most breeders these days seem to supply only mini-dachshunds or the occasional longhaired or wire-haired variety.

I'd been looking for a while, when I came across Kristin Cihos-Williams's Alphadachs breeder listing online. On impulse, I called, got Kristin at once, and learned that she was sitting at home with a very pregnant dachshund named Lily, who was due that very day. We hit it off, and stayed in communication over the next three or four months, with the end result that our son and I drove to Indio on New Year's Day to pick up one of the puppies from this litter (Kristin lives in Temecula, CA, but was at a dog-show in Indio, which is substantially closer to Phoenix).

It's a four-hour trip from Phoenix to Indio, but the eight-hour drive was well worth it.

[Hmm. I tried to upload three photos of Homer here, but not working for some reason. Will try again tomorrow--gotta go to bed now. [yawn].]
Posted by Diana Gabaldon at 3:08 AM 13 comments:

My father was always one to recognize both merit and shortcomings. Consequently, while he was often generous with praise, all his compliments came with a "BUT..." attached. "This is wonderful, BUT..."

That Christmas Day was the last time I saw him. But he'll always be with me, in the pull of water past my arms, in the faces of my children--and in the smell of garlic and chile, floating gently through the air of my kitchen.

For them as don't know, an enchilada is an item of traditional Mexican food, composed of a tortilla (mostly corn tortillas) rolled into a cylinder around some type of filling (traditionally cheese, but can be anything from chicken or beef to spinach, mushrooms, and seafood, particularly in nouveau Southwest or turista restaurants), covered with a spicy sauce, and baked. (Some restaurants don't bother rolling their enchiladas, and just sprinkle cheese and fillings between flat tortillas, but we Do Not Approve.)

olive oil (enough to cover the bottom of a large saucepan)

corn tortillas – these come in packages of 12, or three dozen. If you have more than two people coming to dinner, get three dozen. You can always make home-made tortilla chips out of the extras.

I'm not giving quantities as such, because you can make enchiladas in any quanttity--but if you're going to the trouble, you might as well make a lot of them. [g] (They freeze well, though the tortillas will degrade when frozen and give you enchilada casserole, rather than discrete enchiladas.)

All right. For starters, mince four or five (or six) cloves of garlic finely. Cover the bottom of a heavy saucepan with olive oil (about 1/8" deep) and saute the garlic in the oil (the bits of garlic should just about cover the bottom of the pan, thinly). Cook until the garlic turns BROWN, but be careful not to burn it.
Turn heat down to low (or pull the pan off the burner temporarily) and add flour a little at a time to make a roux (paste about the consistency of library paste). Add the El Pato (or plain tomato sauce) and stir into the roux. Add WATER, in an amount equal to the tomato sauce (I just fill up the El Pato cans with water and dump them in). Stir over low heat to mix, squishing out any lumps that may ocur. If you used plain tomato sauce, add chili to taste (or if you use El Pato and want it hotter, add extra chili)—roughly one large tablespoon of raw chile per can of tomato sauce.

1) heating oil (I use canola oil, but you can use any vegetable oil, including soy, peanut, or olive) in a small, heavy frying pan. Heat over medium heat, and watch it as it gets hot; if it starts to smoke, it's too hot--turn it down.

At this point, the sauce should have thickened slightly, and will cling to a spoon, dripping slowly off. Turn off the heat under the sauce, or reduce to low simmer. (If at any time, the sauce seems too thick, stir in a little more water.) Stir occasionally to prevent it sticking.

Now put out a clean dinner plate for assembling the enchiladas, and a baking dish to put the completed ones in.

With a pair of tongs, dip a fresh corn tortilla briefly (just long enough for the oil to sputter--2-3 seconds) into the hot oil. Let excess oil run off into the pan, then dip the now-flexible tortilla into the sauce, laying it back and forth with the tongs to coat both sides.

Lay the coated tortilla on the dinner plate (and put down the tongs [g]). Take a good handful of cheese and spread a thick line of it across the center of the tortilla (you're aiming for a cylinder about two fingers thick). If you like onions in your enchiladas (I don't, but Doug does, so I make half and half), sprinkle chopped onions lightly over the cheese. Roll the tortilla into a cylinder (fold one side over the cheese, then roll up the rest of the way, and put the enchilada in the baking dish. (They won't have a lot of sauce on them at this point)).
When the baking dish is full, ladle additional sauce to cover the enchiladas thoroughly, and sprinkle additional cheese on top for decoration (I also sprinkle a few onions at one end of the baking dish, so I know which end is onion). Bake at 325 (F.) degrees for between 10-15 minutes--until cheese is thoroughly melted--you can see clear liquid from the melted cheese bubbling at the edge of the dish, and the enchiladas will look as though they've "fallen in" slightly, rather than being firmly rounded. Serve (with a spatula).

The method is the same for other kinds of enchiladas; you'd just make the filling (meat, seafood, etc.) as a separate step ahead of time, and use as you do cheese (for chicken enchiladas, brown diced chicken slowly in a little oil with minced garlic, onion, red and green bell pepper, and cilantro (coriander leaf)--bell pepper optional, and in very small quantity; for beef, you can use either ground beef or machaca).

It usually takes me a little more than an hour to do three dozen enchiladas, start to finish. Once the sauce is made, cheese grated, etc., though, the assembly is pretty fast.
Hope y'all enjoy them!
--Diana
Posted by Diana Gabaldon at 2:08 PM 43 comments:

I had some difficulty coming up with a good list, largely because I like all kinds of things (dachshunds, murder mysteries, Audi SL6's, hickory-smoked barbecue…), but not necessarily eight of any of them. On the other hand, I do like to eat. And cook.

So here's a list of my favorite eight recipes. As time allows over the next couple of weeks, I'll actually post said recipes, but for now—I spent eight hours today driving to and from Indio, CA, to pick up my new dachshund puppy (name still up for grabs, though it might be Homer), and am consequently about to head for bed.

CHICKEN WITH MUSHROOMS IN ORANGE SAUCE