WARRIORS on the way! 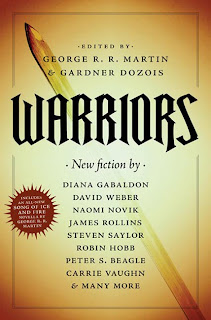 Just got word from the editor of the WARRIORS anthology that it will be released March 10! (In case you're beginning to cast round for new things to read.)

This is an anthology, edited by George R.R. Martin and Gardner Dozois, with short stories and novellas by a lot of very talented people. I have a novella in this book, a Lord John story titled "The Custom of the Army" (and before a lot of you write, demanding that I stop wasting time writing about Lord John...I wrote this novella last year, _while_ finishing AN ECHO IN THE BONE. I normally do work on multiple projects at once; I get a lot farther, a lot faster that way). There's a longish excerpt from this story on my website (www.dianagabaldon.com ), and here's a further short one.

"The Custom of the Army" (in WARRIORS)
Copyright 2010 Diana Gabaldon

A month later, Grey found himself, Tom Byrd at his side, climbing off the Harwood and into one of the small boats that would land them and the battalion of Louisbourg grenadiers with whom they had been traveling on a large island near the mouth of the St. Lawrence River.

He had never seen anything like it. The river itself was larger than any he had ever seen, nearly half a mile across, running wide and deep, a dark blue-black under the sun. Great cliffs and undulating hills rose on either side of the river, so thickly forested that the underlying stone was nearly invisible. It was hot, and the sky arched brilliant overhead, much brighter and much wider than any sky he had seen before. A loud hum echoed from the lush growth—insects, he supposed, birds, and the rush of the water, though it felt as though the wilderness were singing to itself, in a voice heard only in his blood. Beside him, Tom was fairly vibrating with excitement, his eyes out on stalks, not to miss anything.

"Cor, is that a Red Indian?" he whispered, leaning close to Grey in the boat.

"I don't suppose he can be anything else," Grey replied, as the gentleman loitering by the landing was naked save for a breech-clout, a striped blanket slung over one shoulder, and a coating of what—from the shimmer of his limbs—appeared to be grease of some kind.

"I thought they'd be redder," Tom said, echoing Grey's own thought. The Indian's skin was considerably darker than Grey's own, to be sure, but a rather pleasant soft brown in color, something like dried oak leaves. The Indian appeared to find them nearly as interesting as they had found him; he was eyeing Grey in particular with intent consideration.

"Nonsense, Tom." At the same time, Grey experienced an odd frisson up the back of the neck, constricting his scalp. Vain of his hair, which was blond and thick, he didn't commonly wear a wig, choosing instead to bind and powder his own for formal occasions. The present occasion wasn't formal in the least. With the advent of fresh water aboard, Tom had insisted upon washing his hair that morning, and it was still spread loose upon his shoulders, though it had long since dried.

The boat crunched on the shingle, and the Indian flung aside his blanket and came to help the men run it up the shore. Grey found himself next the man, close enough to smell him. He smelt quite unlike anyone Grey had ever encountered; gamy, certainly—he wondered, with a small thrill, whether the grease the man wore might be bear-fat—but with the tang of herbs and a sweat like fresh-sheared copper.

Straightening up from the gunwale, the Indian caught Grey's eye and smiled.

"You be careful, Englishman," he said, in a voice with a noticeable French accent, and reaching out, ran his fingers quite casually through Grey's loose hair. "Your scalp would look good on an Huron's belt."

This made the soldiers from the boat all laugh, and the Indian, still smiling, turned to them.

"They are not so particular, the Abenaki who work for the French. A scalp is a scalp—and the French pay well for one, no matter what color." He nodded genially to the grenadiers, who had stopped laughing. "You come with me."

You can pre-order the book at amazon.com, though if you'd like a signed copy, you can also order it from The Poisoned Pen (www.poisonedpen.com); I go by the store every week or so to sign their orders.
Posted by Diana Gabaldon at 11:09 AM 42 comments:

Email ThisBlogThis!Share to TwitterShare to FacebookShare to Pinterest
Labels: Diana Gabaldon WARRIORS anthology The Custom of the Army 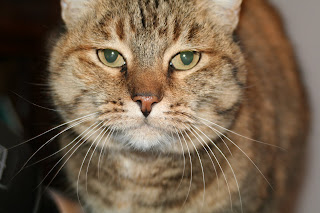 I'm BACK (at long last) from the UK and New York (where I was food-poisoned the night before our return to Arizona. All I'll say about that is that it's marginally better to be deathly ill in Business Class than coach; no one notices if you pass out in your seat, and it's much easier to get into the lavatories). Now dealing with all the Stuff that accumulates when I'm gone, plus some urgent Stuff for the German book-tour _next_ month. But thought I should at least post the appearance schedule for February (all in Arizona). Stay tuned, though, for my riveting account of the UK book-tour in three parts: "The Highheidyins," "The Big Wheel," and "Goose Poop and Candlelight." Coming soon!

I'm trying really hard not to go anywhere or do anything, so I can sit still and write books. Believe me, 2010 is already completely booked, in terms of appearances (yes, I'll be in Germany next month, and yes, I'm doing a short –five cities, they said—tour for the graphic novel when it's released in the US this September—and yes, I'll be at Comics-Con in New York. I'll do the whole-year schedule (as now known) a little later this week). I'll mostly be at home in February, but will be visible at five events (all in-state) this month:

I'll be signing books from 11-1 at Ann Chamberlin's bookshop, located (I'm told) in a particularly desirable location near the jousting (desirable—I'm told--because it's opposite the privies).

My friend Dana has a new Kate Shugak novel out on the 16th, and will be doing the launch party at the Arizona Biltmore Hotel (http://www.arizonabiltmore.com/ ). Laurie R. King (who also has a new book out—GOD OF THE HIVE, a Mary Russell/Sherlock Holmes novel) will be there, too! Free admission, and you're welcome to have books signed by any of us.

I'll be signing all my books (which the bookstore presumably will have in stock). Feel free to bring your older books from home, if you like, too; just be sure to let the bookstore personnel know when you come in.

This is a fun event that usually runs between 2-3 hours. I'll be speaking, reading, and showing off some of the art from the new graphic novel. In addition, the Heritage Society ladies also serve high tea (sandwiches, pastries, and scones, with tea), have a hat contest, a silent auction, and other small entertainments. Books will be available for sale, but you're also welcome to bring your older books from home.

I'll be a speaker (one of several) at this fund-raising luncheon on behalf of Brandeis University. I'll be speaking for about fifteen minutes, and there will be books available for sale and signing. This event is open to the public, with a ticket price of $100 for the day's events, including a gourmet luncheon.

The moderator is Andrei Cherney, the honorary chairman is Al McCoy and Clive Cussler will also be there to sign books and present the first Clive Cussler Award for Literature. (Which they are, very kindly, awarding to me.
Posted by Diana Gabaldon at 1:25 PM 34 comments: