Well, now--here's a question to keep you entertained while I'm gearing up to visit the UK: What sorts of things might you like to see in THE OUTLANDISH COMPANION, Volume II?

I'll be working on this book during 2010 (yes, yes, along with Book Eight, and a few other things, no doubt), but am just beginning to form up an idea of the potential contents. There will of course be

"Cast of Characters" listings for all the aforementioned books. These lists note which books each character appears in, and give a thumbnail description of each character (for those readers who have trouble remembering who's who).

A Comprehensive, Alphabetized and Phonetic Glossary of All the Gaelic in All the Books (so far). [g]

Interesting Features on Writing in General (chunk writing vs. outlines, how to organize scenes so you can find them again, the Fine Art of Backing Up, etc.) and Writing These Books in Particular (the "shape" of each book, internal structure, and interconnections)

Features on Costume and Cookery of the 18th Century

A Truly Massive (but well-organized!) Bibliography, of allllll the References used in writing the more recent Books.

Many Inspiring and Beautiful Photographs of the Scottish Highlands (and perhaps a few less inspiring ones of the author) taken by Barbara Schnell, the German translator for the books.

A Selection of the most Piquant, Poignant, Offensive, and/or Hilarious (whether deliberately or inadvertently) Letters received--and the Author's Unexpurgated Responses to Same.

Controversy: Commentary and discussion on the more controversial scenes, themes, or incidents in the various books.

So....what else? All suggestions welcome!
Posted by Diana Gabaldon at 2:40 PM 161 comments:

Sheffield Hallam University in association with Off the Shelf

Top selling American novelist Diana Gabaldon is our first New Year speaker. Diana Gabaldon is the author of the award-winning, New York Times bestselling, Outlander novels. She will launch the latest book in the series in Europe by making a trip to Sheffield.
Diana is the great, great granddaughter of Sheffield artist Godfrey Sykes, who in 1856 was deputy principal of the Sheffield College of Design which is now part of Sheffield Hallam University. His famous Minerva Frieze has been restored by Sheffield Hallam University and Museums Sheffield, which is currently on display in the Furnival building, City Campus, and Diana will be giving a lecture as part of the University's retrospective on his work.
Tickets are free but must be booked in advance.
To book, please click the link Diana Gabaldon or visit www.shu.ac.uk/events/ 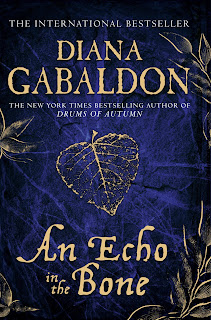 For reasons best known to themselves, Orion Books (my UK publisher) published AN ECHO IN THE BONE in Australia and New Zealand when it came out in the US and Canada--but are publishing the hardcover edition in the UK as of January 7th--i.e., in four days!

They are bringing me over to the UK--in conjunction with Sheffield-Hallam University (more about that in tomorrow's blog entry)--for a quick publicity tour to promote the book. Here's the breakdown of events in the UK (you'll notice "tbc" here and there--that means "to be confirmed," and essentially means that if anyone wants to interview me or ask for a special event, that's when time is available): I hope to see many of you there!

1.30pm Interview with Claire Black for The Scotsman (venue tbc)

Travel to Sheffield, University dinner (not a public event)

PM book shop stock signings in the Yorkshire area (no details on this; they tend to leave that up to the sales rep who's accompanying me. If you live near a bookshop in the general vicinity of Sheffield, you might ask the bookshop to contact Orion and ask for a drop-in.)

Stock signings in Manchester (See note on drop-in signings, above. If your local Manchester shop would like a drop-in, they should contact their Orion sales rep.)

Publication dinner (not a public event)
Posted by Diana Gabaldon at 3:02 AM 22 comments:

HAPPY NEW YEAR to all! My personal idea of a great New Year's Eve celebration is a nice nap, after which I get up, go up to my office, and light a new pillar candle to work by (the new one is white, scented with—it says on the bottom—Japanese Cedarwood. A very subtle and unobtrusive scent. The old one—which expired the night before, with excellent timing—was dark blue and reeked of cinnamon.)

(I learned something Extremely Interesting recently, btw, speaking of smells. You know how sight can vary between your two eyes, with one being, say, 20/40 and the other 20/200? Or how your hearing may be more or less acute in one ear than the other? Apparently the same thing is true of nostrils.

I was somewhere on a book-tour (believe me, the only way I know where I am, after the third day or so, is to look at the schedule), had escaped momentarily for a quick walk, and came across a huge tree that was dropping fruiting bodies the size of small green baseballs. (Think it may have been a chestnut of some kind, but can't swear to it, as I didn't have a knife with which to open one—thanks to the evil machinations of the TSA.) I picked one up and brushed it under my nose, noting that it had a really unusual, pungent fragrance—not like anything else I've ever smelled. So I took it along with me, back to the hotel….ah, OK, I was in Lexington, Kentucky. I recall the hotel, because it was under construction, and I couldn't get a knife from Room Service, either, because there wasn't any—sniffing it periodically along the way.

At one point, I changed the hand I was carrying it in—and consequently, next time I sniffed it, noticed that the smell was different. "Well, that's weird," I said, surprised, and proceeded to experiment. I could certainly smell it with either nostril, but much more strongly, and with a great deal more complexity, on the right than on the left.

I'd forgotten about this—you forget most things on a book-tour, including your name (no, I'm not kidding)—but remembered while doing the Christmas cooking, when I went outside to pick fresh herbs. Sure enough, I can smell rosemary, basil, and sage all just fine on the left—but I pick up a much richer melange of aromatics on the right, while I'm getting mostly basic volatiles (turpenes and the like) on the left. Truly interesting. Something to think about, next time you hit the perfume counter; if you normally test perfume on one wrist, be sure to pass that wrist under the opposite nostril, too.)

One of the things on my New Year to-do list is to do something about my (putative) Facebook page—which you may notice has apparently disappeared.

Why? I have _no_ idea. See, I don't personally "do" Facebook. At all. (Had we but world enough, and time...) BUT, when ECHO came out, Borders invited me to come do a two-hour chat on _their_ Facebook page, and in order to get to said page, I was obliged to open a Facebook account.

Naturally, I asked my youngest daughter how to go about this. [g] She told me that I should start a "celebrity" page, rather than a plain individual page, so I did that when I signed up, and the software asked me if I wanted to link my page to my blog. I shrugged and said, "Yeah, why not?" So that's where the original listing came from. Mind, there was never anything _on_ my Facebook page, save my picture.

Promptly departed on two months of book-touring, and somewhere in there, the page I'd started apparently disappeared (or so I gather, since the link from my blog no longer works; I haven't been back on the Facebook site since the Borders interview). Have had _no_ time to worry about it since, though one kindly person who'd noticed it mentioned to me that there are other "Diana Gabaldon" pages on Facebook, and one of these might have complained about my page on "intellectual infringement" grounds and had it removed. [rolling eyes]

Anyway. I have a whole list of Promotional Things that need to be addressed, from correcting idiocies on my Wikipedia page to re-registering an official Facebook page (preferably with a little content on it [cough]), updating the website (well, that one's a little easier; at least I know _how_--I just didn't want to send my long-suffering webmistress more Stuff until the holidays were over [g]), etc.

_That_ stuff all starts on Monday, along with a return to a regular writing routine, now that a) all the kids, in-laws, guest dogs, etc. are or shortly will be gone (hallelujah. Not that I don't love them all dearly, but seven dogs and nine people in one house is pushing it, even for me), b) I will have finished the last revisions to "A Leaf on the Wind of All Hallows" (may actually finish that one tonight, though I'll read it through again tomorrow before sending it on to the anthology's editors), and c) I finally (in spite of guests, double-Christmas, etc.) managed to dig through the piles that had accumulated in my office during my absence, put things away, sweep the floor [g], and deal with (mostly) everything that had been neglected for the two-plus months I was away, and d) have managed to prune all the roses, grapevines and fruit trees, as well as rip tons of dead grass and mint-stalks out of my garden. Tomorrow, with luck, I'll be able to turn over a few square feet of soil (removing the _roots_ of said grass and mint) in order to plant nasturtium seeds, which have to be put in no later than the first week of January, if you want good bloom before the heat hits and kills them.

So anyway, I _should_ maybe have something in order about the Facebook thing sometime next week. If and when, I'll announce it here, as well as on the website (which, for those as may not know, is www.dianagabaldon.com).

HAPPY NEW YEAR!
Posted by Diana Gabaldon at 2:28 AM 28 comments: