As part of the new website thingy, my blog has become an integral part of said site. To read and post comments to the new blog (it's got all the older posts there, too), you want to go here.

Many, many thanks to the very talented Jeremy Tolbert of Clockpunk Studios (www.clockpunkstudios.com), who did the new design (and guided me through the maze of learning to work with WordPress). And many thanks to the lovely Rosana Gatti, who designed (more than once {g}) the original Diana Gabaldon website, and has run it for more years than I care to count. (Thinking especially of longevity these days, as a) it’s my birthday {g}, and b) OUTLANDER (the novel) was published twenty (yes, 2_0) years ago!)

Now, there will be a few spots where I’ll add new material, links, excerpts or whatever as we go on, but I think the new site is essentially complete. (There will be a link to a Facebook page, for instance, but that’s not quite available yet.) And my blog will now be an integral feature of the website, as well.

I hope you enjoy exploring the new site! Do please let me know—there’s a place for comments, below, and on other parts of the site—if you see anything that doesn’t work, or have suggestions for things we may not have thought of that you’d like to see. (And you can use the “Follow” links to talk to me via Twitter, if you’d like.)

And for the Corgi Lovers... 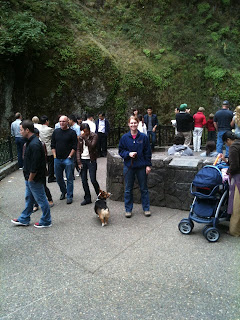 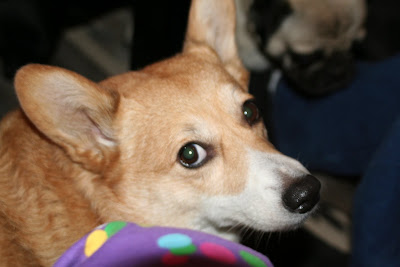 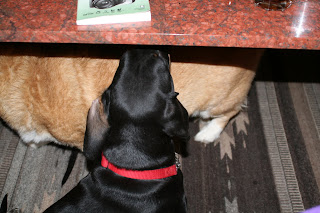 For the Corgi-lovers....the elusive Charlie! (hiding under the coffee-table while being molested by a nosy dachshund)--and also, Elder Daughter with her corgi, Badger.

And now I must be going and adding the finishing touches to the new website!
Posted by Diana Gabaldon at 10:27 AM 38 comments: The tree is undecorated, the leftovers are frozen (except for the chocolate), the pipes froze but luckily didn't burst, the adult kids have all returned to their respective domiciles, and as soon as we all recover from the holidays, Normal Business will resume.

(That's Otis in the foreground, there--my son's pug; the two black lumps just visible behind me are Homer and JJ. Charlie--son's corgi--doesn't like to get on the couch, and a good thing, too; he's under it.)

Email ThisBlogThis!Share to TwitterShare to FacebookShare to Pinterest
Labels: Diana Gabaldon Happy New Year She who Sleeps with Weenies 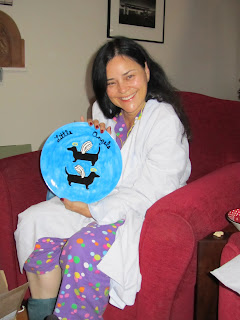 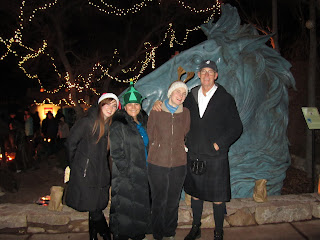 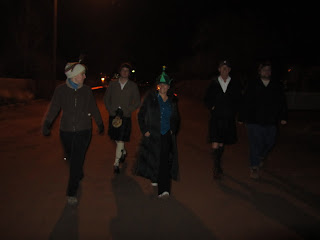 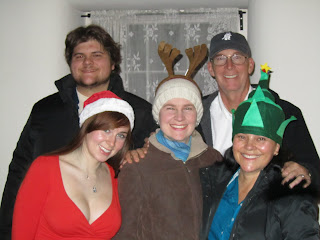 We started Christmas around 5:30 PM on the 24th, with chipotle corn soup and pork sliders for a quick pick-up supper to sustain us through an arduous evening. Then we filled the family flasks ({ahem} we don't actually use these except on Christmas Eve, but everybody has one, to be filled with the evening's choice of beverage. Laura's therefore was full of Alabama Slammer (a hideous concoction made of Southern Comfort, Amaretto, Sloe Gin

This is a very steep road, lined with art galleries on both sides, about a mile long. And on Christmas Eve, all the galleries festoon their premises with millions (literally) of farolitos (aka luminarias--paper bags with lighted votive candles inside), lighted crimson ristras (clusters of hanging dried chili peppers--though the ones meant for display are often red chili-shaped lights), etc. The whole town (and not a few surrounding settlements) turns out to walk up and down the road, pausing to sing Christmas carols wherever one is breaking out (the occasion is an invitation to anyone who thinks they can play a musical instrument; they stake out a street corner and haul out the old trombone, accordion, fiddle, or ocarina and have a bash at “Old King Wenceslaus”) or--if a kilt-wearer (Doug and Iain both went in full kit) to warm one's knees (or dangly bits, as the case may be) over one of the bonfires lit here and there along the street. All very sociable, especially after a few nips, and you get to see your fellow man attired in Just About Anything you can imagine, and quite a few things you wouldn't dream about after a late lobster supper with horseradish.

On from this to church--where you want to show up when the doors open at 10:30 PM, because it's your only chance to get a seat, the midnight services at the Basilica Cathedral of St. Francis of Assisi being one of the Sights of Christmas in Santa Fe, and thus heavily patronized. Random carol-singing 'til 11:00, then the more formal "Lessons and Carols," featuring readings from Isaiah, interspersed with a longish cantata by Vivaldi and few audience-participation numbers to keep everyone from falling asleep before Mass proper gets underway at (logically enough) midnight.

Midnight Mass is normally a much snazzier production than the ordinary Mass, even though the structure of the proceedings is exactly the same. More music, assorted processions, celebrated by the bishop (complete with mitre and staff), etc., though. This one featured bilingual music (alternating verses and/or phrases in English and Spanish--often switching with bewildering rapidity), the Las Posadas procession (when the santos peregrines (the “traveling saints”) who have been going house to house for the last nine days, seeking a place for the baby Jesus to be born, finally come rejoicing into the church and everyone sings, "Vamos Todos a Belen" (Come Everyone to Bethlehem--which we always find funny, because my father was in fact born in a tiny town a hundred miles south of here, called Belen), and a Native American dance (done by Laguna Indians from the San Juan Pueblo, in traditional dress and solemnly waving fans of turkey feathers, while drumming and chanting down the center aisle) for the offertory (they circled the altar, and then the bishop, who seemed somewhat startled), incense, small orchestra (with more kettle drums than you could shake a stick at. You want kettle drums for something as dramatic as Christmas), choir, etc.

Came home under starry skies (very warm here--it was shirtsleeve weather outside today; the boys and Doug were playing football in the street, egged on my Jenny and Laura) and had brownies and milk, then everyone (other than Santa {yawn}) retired. I retired too, around 3 AM, stockings all filled and the dogs kept from investigating them (just to be safe, I put the package of smoke kangaroo jerky up on the mantel).

Was rousted at 8 AM to come and open presents (see attached; the plate was the hand-made gift of Elder Daughter), then puttered pleasantly and made lunch--machaca tacos, enchiladas and tamales, all washed down by quantities of Mexican beer. Spent a pleasant afternoon napping, reading, and nibbling, watching everybody watch football, and trying to induce my new iPad to work (“intuitive,” my left foot. Technology is one of the things bad language was intended for. Sufficient poking and muttering, though, and I Have Prevailed). Leftover enchiladas, a handful of Dutch chocolate mints, and a sense of quiet bliss reigns.

It was a wonderful Christmas, and I hope all of yours were likewise!

(Oh, the hat? It's supposed to be a Christmas tree, though I'm told I resembled the Queen of the Universe in it.)

This being a nice piece in USAToday, doing a round-up feature on recent graphic novels, in which they included THE EXILE, and said nice things about it. {g}

They did misspell Jamie's last name (though they got mine right, for a wonder)--but you can't have everything.
Posted by Diana Gabaldon at 9:49 AM 21 comments:

(Yes, I really_ am_ working on the new website; have had out-of-town company for the last couple of days, though, and much as I enjoy them, they do take up time in which I could otherwise be going blind typing up descriptions of the seven big OUTLANDER novels....)


I may have mentioned that I get interview requests All The Time? Well, this one came in from the Canadian publicist a few weeks back, with a note saying, "You don't have to do this if you don't want to."

I read it, laughed, and emailed back, "Are you kidding? This is the most interesting interview I've had in months, if not years!" At last, an interview that didn't start out with some variation of, "Soooo....how did you get the idea to write these books?", didn't ask me "whether you've thought of making a movie of these books?", and didn't want to know who I'd cast to play Jamie Fraser!

(You know that feature on my website called "FAQ"? It'll be on the new site, too. It stands for "Frequently Asked Questions," and the point of it to supply answers to the Questions That EVERYBODY Asks Me. You'd think someone preparing to do an interview with somebody would go look at the somebody's website first, wouldn't you? But noooooo......) But I digress.


This interview was from a nice person named Theresa Carle-Sanders, for her food website, www.IslandVittles.com, and she wanted my permission to run a short excerpt from VOYAGER, describing a particular 18th century dish, to accompany a brief interview about the food in my books.

The interview is here
and I hope you'll enjoy both that, and the website, which is drool-worthy.
Posted by Diana Gabaldon at 9:22 AM 36 comments: