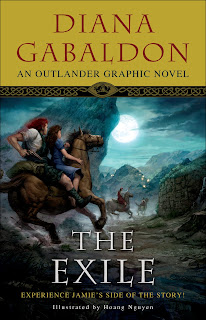 I’ve mostly been staying home and writing this month. Yes, am definitely working on both SCOTTISH PRISONER and Book Eight [g]—though this week, most of my work time has been devoted to reading/correcting the galleys for THE EXILE—for which the cover art has just been released! (Yes, yes, yes, Claire should indeed be wearing her shoes here [g], and with luck, that will be fixed along with a number of other small things. And the flashes among the rocks are musket-fire.)

I’m doing a few appearances/jobs this month, but most of them are not public functions (I’ll be giving the keynote speech at the Glyph Awards banquet, for instance—this is the annual dinner for the Arizona Publishers Association—and judging undergraduate science presentations for Northern Arizona University’s UGRAD program; also meeting with the committee of judges for the Agassiz Prize for Science Writing, which I (and a couple of like-minded scientists) fund and support).

The one thing that _is_ public is a book-signing held as part of the local RWA chapter’s “Desert Dreams” conference (I’m doing a workshop for them, too, but that’s open only to conference attendees). That’s this Saturday—April 17th—at the Chaparral Suites hotel, and the mass book-signing (attended by _all_ the published authors at the conference, not just me) will be open to the public.

Owing to the large number of people participating, the bookseller can’t bring _all_ the titles for everyone, so they asked me which of my books I’d like to have available for sale. They’ll have OUTLANDER in hardcover and trade paperback, ECHO in hardcover, and THE OUTLANDISH COMPANION (hardcover), but if you would like to bring your own books to be signed, too, that’s totally OK by me.