The "Dr. Who" Connection 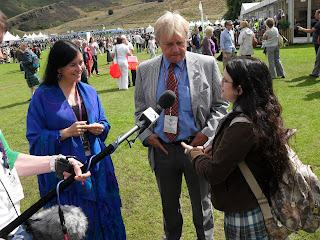 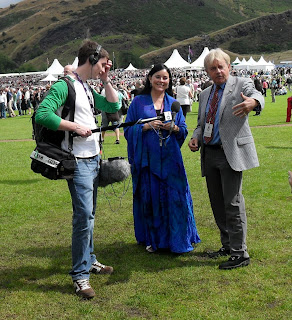 Frazer Hines (the actor who played Jamie MacCrimmon, a companion to the second Doctor, on “Dr. Who”) sent me these photos this morning—they were taken last summer in Edinburgh (by a nice journalist named Jean Brittain—thanks, Jean!) while I was appearing at the Gathering there. You can’t see any of it, alas, but we’re on the grounds of Holyrood Palace here, talking with fans who’d come to my reading.

Now, I’ve known Frazer on paper for years; when my first book was published, I sent him a couple of copies, with a letter explaining that it was a “Dr. Who” episode in which he’d appeared that caused me to set the book in eighteenth century Scotland, and he’d kindly replied to me. But we’d never met in person. (The long version of the story is (or shortly will be) posted on my website – www.dianagabaldon.com.)

Last summer, though, a BBC reporter, seeing my name on the list of guests for the Gathering, had a brainstorm, and called to ask whether I’d be willing to do an interview with Frazer for a radio program. I said I’d love to, and was expecting to meet him at the hotel that evening. As I was working my way toward the end of the enormous signing line, though, I looked up and smiled at the next person, thinking, “Well, he looks familiar; did I see him in the bar…oh. Oh!”

Oh, indeed. [g] Anyway, we had a lovely chat, with each other and with a few fans, and then did our main interview the next day as planned (more or less interviewing each other while watching snippets of “War Games”—the episode in which Frazer---er…well, Frazer’s kilt, at least [cough]—had caught my attention).

The BBC has finally finished all its editing—boiling down three or four hours of material to half an hour—and is broadcasting the interview this week. There are two scheduled broadcasts on the BBC proper, but they also have a podcast version, available for listening anytime during the next seven days. So I thought I’d put up a link for those who don’t want to try to figure out the time changes:

And for those who are interested, the Whole Story of the Dr. Who connection is available on the website.
Posted by Diana Gabaldon at 4:25 AM